“Look up from your computer. And see the blue sky that brings you joy.” 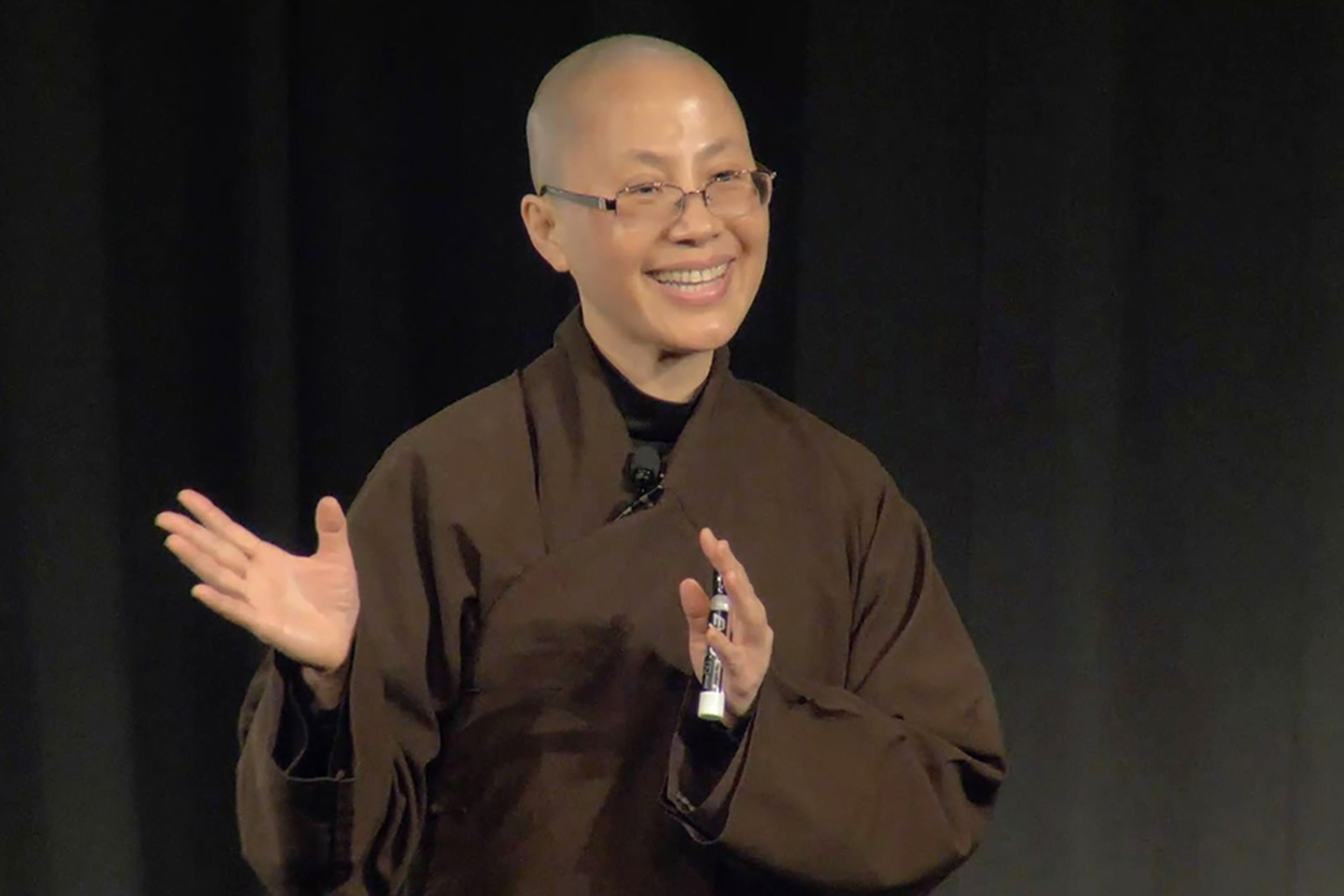 Dharma teacher Sister Dang Nghiem challenged her listeners to “Look up from your computer. And see the blue sky that brings you joy.” A Buddhist nun in the tradition of Thich Nhat Hanh, Sister Dang Nghiem spoke on the topic of “Mindfulness as Medicine” at MIT on March 7 as part of the T.T. and W.F. Chao Distinguished Buddhist Lecture Series sponsored by MIT Global Studies and Languages.

The brown-robed sister, smiling and speaking barely above a whisper, began by leading the attentive audience of over 200 people in a short seated meditation. She explained she would not be presenting a lecture as such: “It’s more of a heart-to-heart transmission.” Three sounds of a bell were struck by Sister Truc Nghiem, known as “Sister Bamboo.” Both sisters, who reside at the Deer Park Monastery in California, were invited to MIT for two days of activities, organized in conjunction with MIT’s Program in Women’s and Gender Studies and the Addir Interfaith Fellows Program. The bell was loaned to event organizers by Temple Vietnam, a local Buddhist temple.

Sister Dang Nghiem was born in 1968 in Vietnam during the Tet Offensive, the daughter of a Vietnamese mother and an American soldier. She lost her mother at the age of 12 and immigrated to the United States at the age of 17 with her brother. Living in various foster homes, she learned English and went on to earn a medical degree. After suffering further tragedy and loss, she quit her practice as a doctor to travel to the Plum Village monastery in France where she was ordained a nun in 2000. She is the author of two books: “Healing: A Woman’s Journey from Doctor to Nun” (2010) and “Mindfulness as Medicine: A Story of Healing and Spirit” (2015).

A central theme of her talk was the role of meditation and mindful breathing as an antidote to the stresses, pain, and traumas of life that can produce physical and mental illnesses, among other difficulties. She discussed her own history with depression, headaches, and neuro-Lyme disease, as well as her experience as a survivor of sexual abuse.

“We are very privileged people, and yet in so many ways we don’t have control over our own life. As doctors we are pushed to see 20, 30, 40 patients a day. As scientists you’re forced, pushed to finish one project after another.” Some of the stresses are also produced from within ourselves. She said, “We are very hard on ourselves. You got a degree. It’s not good enough. I have to get another degree. You finished a project? Oh no. I have a second project. You just don’t take the time to acknowledge what you have done, how hard you have worked, how far you have gone.”

By using meditation and mindful breathing, she said, the mind and body can rest and relax. “You don’t have to become monks and nuns to practice mindfulness, or to practice meditation. You can practice wherever you are.”

She spoke at length about one of the Buddhist principles: “interbeing” — that is, the interconnectedness of life, and the interpenetration of apparent separate phenomena. She said, “It helps us not to feel so isolated when we are in a classroom, in a lab, when we are so engrossed in our project, surrounded by concrete. Sometimes we feel so cut off from life. We’re not aware of what’s going on and can be so much in despair and desperation, because of deadlines, because of pressure. But if we just remember about interbeing — how our happiness and suffering affect not just one person, not just our loved ones, our family members, but the whole society. The ripple effect. So we come back to our breath, to our body, to smile, to take good care of ourselves, because the one contains the all. Taking good care of ourselves is taking good care of our family, of our society. That is love.”

One aspect of “interbeing” is understanding our interconnection with people across disparate backgrounds. She reminded the MIT community, “We are a very privileged population. For every student or professor there must be hundreds of thousands of people who will never attain this kind of privilege, education, status in society.”

She addressed the concern that happiness and contentment might lead to complacency and under-achievement. She said, “People become more creative when our minds are spacious and calm. We see possibilities. We can be more spontaneous. As scientists we can become more like technicians. Because we keep repeating the patterns. We don’t see new ways to do things. New angles to the same problem. If you take those moments to take care of your body and mind. To just put it aside. Trust your consciousness. Our consciousness has many different levels. We usually use just the superficial levels. But deep down inside is the well, it’s like the ocean, that is unlimited. And when we can let that deep store consciousness to be at work we become very creative.”

The evening was emceed by Professor Emma J. Teng, the T.T. and Wei Fong Chao Professor of Asian Civilizations at MIT and head of Global Studies and Languages. The sister was introduced by Professor Elizabeth A. Wood, professor of history and interim director of the Women’s and Gender Studies Program.

During the discussion period, a student asked why she should do her homework if meditation is what makes her feel good. The sister encouraged the student to use meditation or mindful breathing to help her study. “You still do what you need to do, and yet it comes from a different well. And it’s inspiring. It’s nourishing you as you do it.”

She challenged those in the audience to step away from our computers and mobile phones. “We say we have no time, but every second we get, we get out that electronic gadget and start pressing the buttons. We don’t have enough love for ourselves. We consume constantly. We give no chance for the mind to rest, for the engine to cool off. Put them aside, my dear. And simply breathe and smile. Look at the beauty of nature. Look at the face of your loved one. Your child is growing up. Your loved one is growing away, apart from you. Connect.”

The sister joked that an alternate meaning for the acronym “MIT” might be “Mindfulness in Technology.”

After the lecture both Sister Dang Nghiem and Sister Bamboo met with members of the MIT Vietnamese Students Association.

The following day, more than 40 MIT students, faculty, and staff from religious, ethics, athletics, and wellness organizations attended an “eating meditation.” Event organizer Olga Opojevici said the event included representatives from different groups on campus that provide programming in mindfulness. “This gave everyone a chance talk to each other about what resources already exist, and what could be created, to promote mindfulness practices on campus. The visit of Sister Dang Nghiem and Sister Bamboo was a true catalyst for this.”

Earlier in the morning, about 35 people also attended a walking meditation in the Zesiger Sports and Fitness Center, led by Sister Bamboo.

A video of the talk is available on the website of the T.T. and W.F. Chao Distinguished Buddhist Lecture Series.