Dans un quartier de Paris was created in the mid-1980s to early-1990s out of a collaboration between MIT Foreign Languages and Literatures and MIT’s Project Athena to use newly-emerging computer technology to create innovative materials for language learning. Dans un quartier de Paris is a multimedia interactive documentary that allows students to explore a neighborhood of Paris via multiple dimensions: its space (its streets, its stores, its noteworthy places, such as La Place des Vosges, l’Hôtel de Sens, l’Eglise St Gervais, etc.), its people (some having lived there for a long time, some newly arrived), its past history and personal stories (told by a variety of people of all ages, storekeepers, inhabitants, etc.). With the help of an array of exploratory tools such as a map and a guidebook, as well as a variety of linguistic tools, and thanks to a large number of innovative activities, learners are led to explore the neighborhood through many different lenses.

The overall goal of “Dans un quartier de Paris” is to provide the learners with an insider’s view of a foreign cultural world, in this instance that of a quartier. The program provides multiple paths and multiple points of views, so that users can better understand the many elements that shape people’s thinking and attitudes toward their living and working environment.

(audio to this video is street noises)

It is a visual database, which includes people, streets, buildings, objects and artifacts that can be explored in multiple ways by learners at many different levels, and for many different purposes.

Old and new store fronts co-exist, but for how long?

(images only, no sound track)

A young luthier talks about the neighborhood.

Mme Izrael owns Le Monde des Epices and doesn’t like what has happened.

M. Desmarty explains why the neighborhood was better before…

“Dans un quartier de Paris” provides multiple paths and tools into the exploration of the neighborhood and in particular a series of maps and submaps designed to help the user physically locate places as well as a guidebook containing a variety of information.

The map of Le Quartier with La Tartine highlighted. 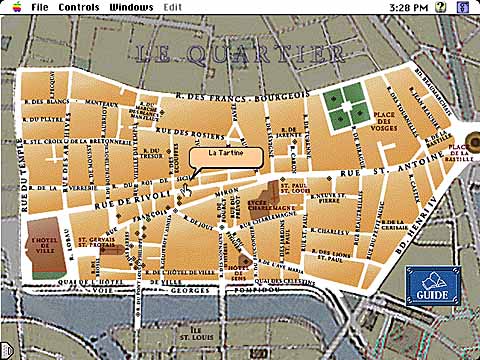 The Map allows the user to randomly explore the neighborhood.

The Guide provides the user with more structured information. It contains four entries:

1) Gens, which lists all the people one can meet 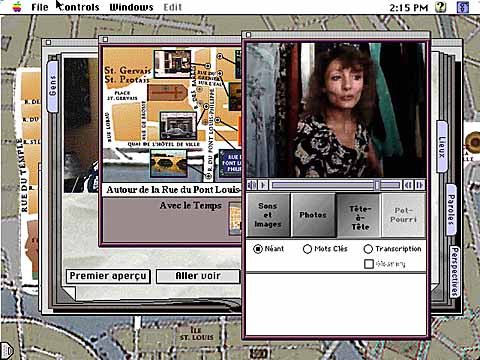 Mme Levy moved in recently and likes the neighborhood.

2) Lieux, which lists all the places one can visit. 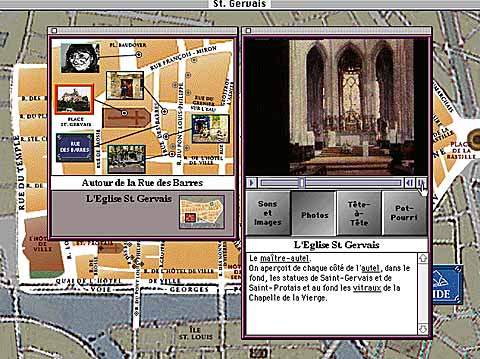 3) Paroles, which focuses on the words that people use when they talk about certain aspects of their neighborhood: what a “real commercant” is, what “lively” means, what “habiter” means, etc… The juxtaposition of several points of view around a same word allows the user to uncover the different meanings these words hold for different people. 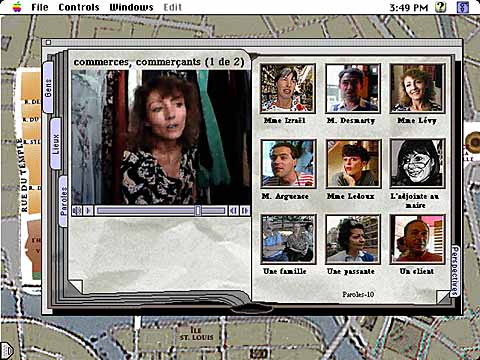 4) Perspectives, which focuses on the references people make when they talk about their neighborhood (notions of time, of space, of self, of others, etc…), provides learners with clues to how people frame issues, and allows themto acess the underlying cultural framework within which people express and define themselves vis a vis their environment. 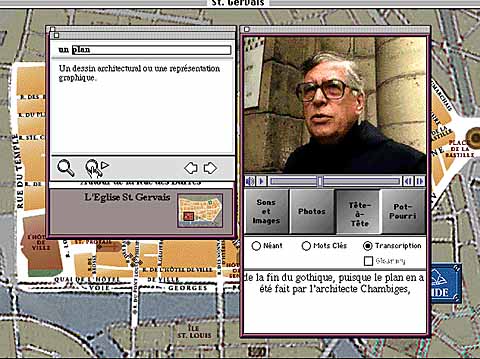 Back to Creative Pedagogies ›

A major part of the funding has come from the Annenberg/CPB Foundation, the Florence Gould Foundation and the National Endowment from the Humanities. Supplementary grants were given by the Consortium for Language Learning and Teaching and the French Ministry of Culture.

Direct all inquiries to Gilberte Furstenberg.

High school and College students of French. Users of many different levels. However, Dans un quartier de Paris is not just a language program but can be of interest to people of different fields and domains of interest. It is an intrinsically multidisciplinary project, where the traditional boundaries between disciplines such as language, history, literature, art disappear and where language becomes, more and more, not an end in itself, but a tool, an entry point, an access into a foreign multidimensional world.
Dans un quartier de Paris is not a self-instructional program. But it lends itself to the design of a multiplicity of culturally-based tasks to be done by language learners of all levels, both in the language lab and the classroom.

A Teacher’s manual and a Student Activities workbook accompany the program.

CD-ROM for Macintosh.
Recognition, Awards
Winner of the 1998 Prix Special du Jury at the Innovalangues Competition in Paris.