Celebrating the passion and devotion our students

Foreign Languages and Literatures is pleased to announce that Carmel Mercado (senior in Biology) was awarded the FLL Award for Excellence. The award includes a $1000 prize to be used for travel and cultural exchange. Carmel’s background and achievements speak to the importance of global education and foreign language teaching at MIT.

Carmel Mercado grew up in South Florida at the intersection of Filipino and American culture, what she calls “a mini-Philippines hidden within a cookie-cutter suburban community,” Her Asian appearance and Spanish sounding last name forced her to confront the question, “What are you?” In her essay, she describes her struggle to respond.

Should I consider myself Filipino because the values instilled in me came from my conservative immigrant parents? Should I consider myself American because although I was Filipino in appearance, my mannerisms and language were reflective of my interactions in the community? How does one define culture and how does this influence my ability to communicate with others? . . . it was through language study that I developed a better understanding and appreciation for my identity as a Filipino American.

At MIT, Carmel took courses in French, Spanish, and Japanese, and she impressed her teachers in each of these languages. To quote one referee’s letter, “Among our many wonderful and talented students, Carmel is truly outstanding. . . . Carmel is now multilingual (five languages) and she navigates between all these languages and cultures thoughtfully; she is a true cosmopolitan and model for the best of what global students can be.” She participated in the January Scholars in France program and will be spending this coming summer in Kobe, Japan on the MISTI program.

Carmel is working towards a career in medicine and has numerous travel plans, which the FLL Award for Excellence will help with. She has not yet settled on which (or how many) of her languages she will use, but here is a sampling of her ideas.

Carmel will spend the summer in Kobe, Japan on the MISTI program, and she may use some of the award to travel within Japan.

While in Asia, she hopes to visit the French Polynesian islands to come to a better understanding of the varieties of mixing between ethnic Polynesians, Europeans, and East Asians (and to use her French).

Carmel is also eager to explore northern Spain, for example to travel the route of the pilgrammages to the Santiago Compostela Cathedral in Galicia, perhaps traveling from the Basque country. The route would provide additional sustenance for her hunger for languages because, as she notes, “Along the way, I would go through at least 5 of Spain’s autonomous communities, each having a unique language, history, culture and economy.” 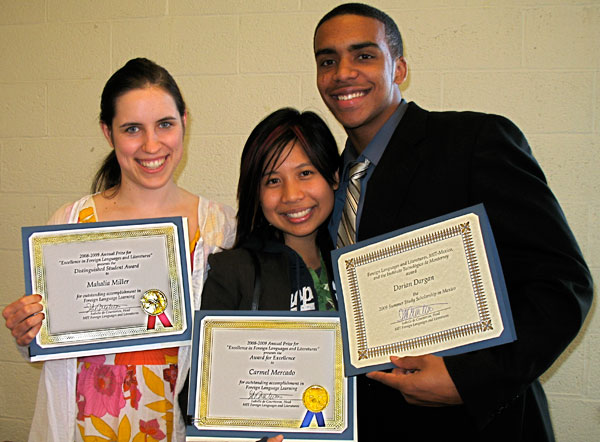