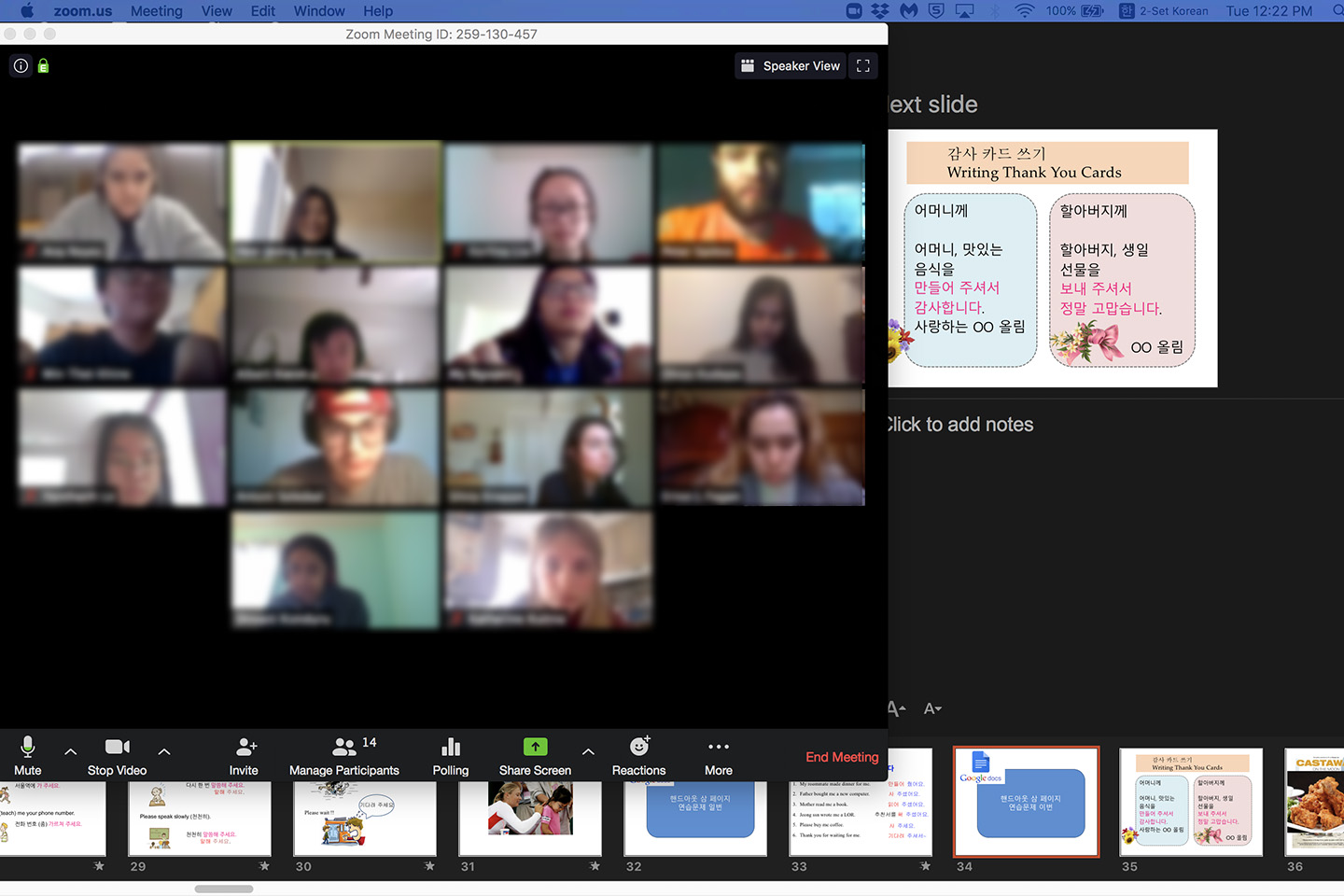 Online classes pose special challenges for language instruction, which relies on a high degree of interactivity between students and teachers, particularly in the practice of speaking and listening skills. But when teachers and students respond with creativity and curiosity, we were surprised by the results.

When Korean instructor Hee-Jeong Jeong learned that classes would be going remote effective March 30, she was most concerned about students in her Korean II class, who needed a high degree of individual attention through various activities in order to learn the challenging language of Korean.

Following the first week of instruction, Dr. Jeong reached out to students to find out their perspectives on remote instruction, and received encouraging responses that showed how her students were responding to the challenge of online learning with openness, curiosity, (some skepticism), and a sense of humor.

When we were asked to leave campus and told that classes would continue online, I didn’t feel that I would be missing out on much when it came to my STEM classes. Usually, for those classes, most questions were already asked online through Piazza and lectures were being recorded or had been recorded at some point to be viewed on our own time.

The one class I was worried about, however, was my language class. One of the most important aspects of learning a language is immersion, and immersion, I thought, was something that is best achieved in-person. While I still believe this to be true, it isn’t to say that our Korean class held through Zoom meetings ranks far behind.

Surprisingly, we are still able to practice speaking with other students, have an interesting and interactive lesson taught by our teacher, and most importantly, enjoy learning the language even if it is done virtually. While I look forward to being back in the classroom, for now I appreciate having our almost-daily classes and logging in on time for our Zoom meetings instead of running across campus to make it to class by MIT time, i.e. 5 minutes after.

In Korean II, we’re using Zoom and Google Documents to continue instruction. When we were in person, our professor was amused by a unified mumble of vague Korean as we repeated new vocabulary words. Over Zoom, however, it became even more entertaining.

After 3 new words to repeat, no coherent words could be heard as everyone begins to repeat different words at different times. If the melody of Korean gibberish wasn’t humorous enough, the shared Google Document was also chaotic. There’s a scramble to type an answer to a question, [to force] your classmates to end up with a question with harder vocabulary… all the more challenging when you don’t have the hangul keyboard memorized.

It’s all in good fun and good practice for the terrifying online exam to come to though.