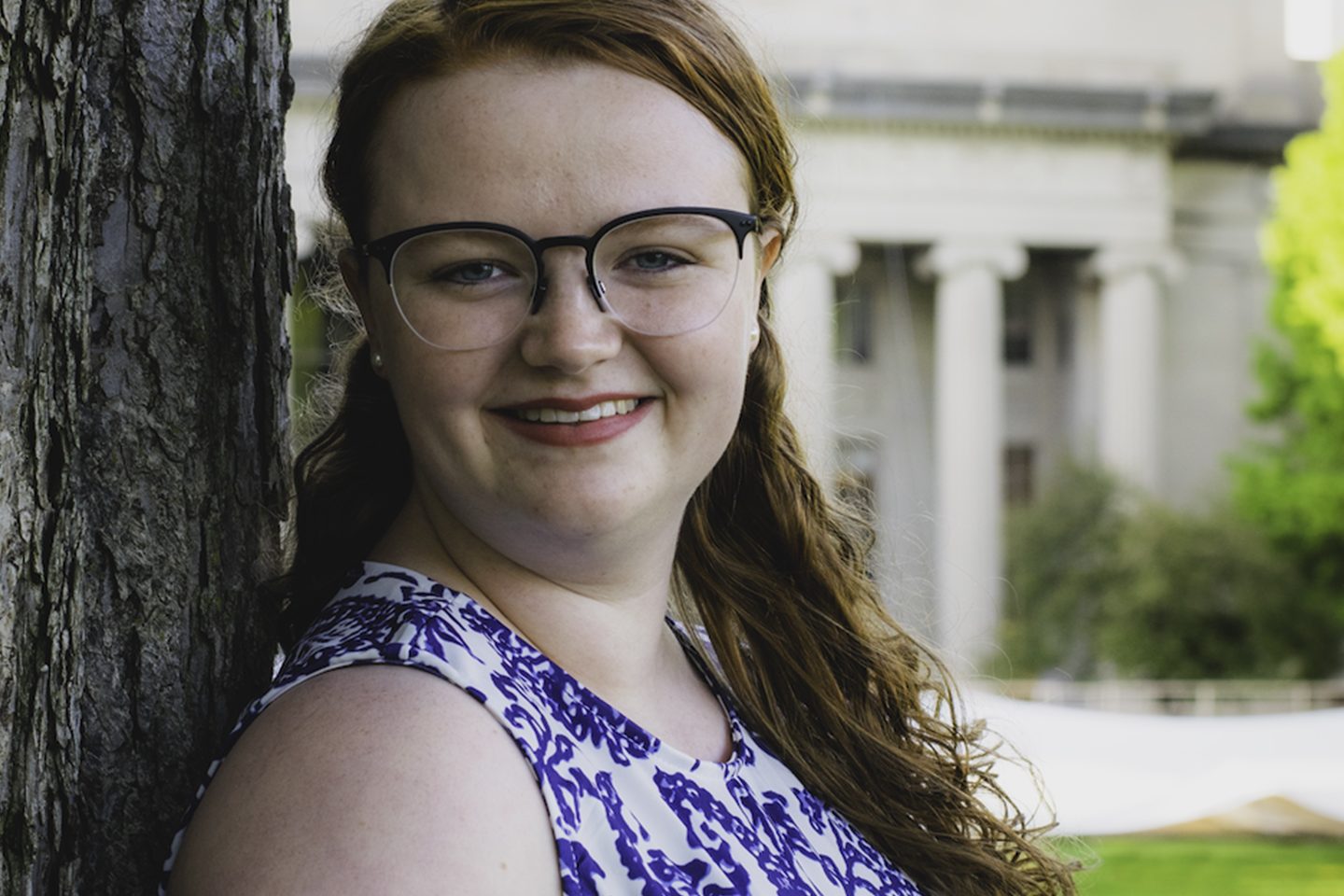 Riley Davis '19 was among the GSL students who presented original research at the inaugural Student Research Showcase on May 3, 2019. Photo by David Rich.

Inspired by the research showcases she experienced in her previous position in the Biology department, GSL Undergraduate Academic Administrator Joyce Roberge launched GSL’s inaugural Student Research Showcase on May 3, 2019.

Emceed by Associate Professor of French Studies Catherine Clark, the lively event was attended by 25 lecturers, faculty, students and staff, who enjoyed a stimulating afternoon of student research presentations. The following students presented their work:

VR can be a powerful tool for providing context-rich experiences for students learning foreign languages. With settings in authentic international contexts, VR environments can provide cultural experiences and boost familiarity with the target language and its culture. This project gives language learners an opportunity to practice speaking in such an immersive environment. Users are placed in various locations simulating common interactions when traveling in a foreign country, such as ordering food in a restaurant and booking a hotel room. Users interact with characters in these VR contexts with their voice and get audio feedback, allowing them to practice speaking and listening in the target language.

Graphic memoir is an emerging genre of deeply personal, as well as historical, stories such as Persepolis, Maus, and Vietnamerica. In this presentation, I examine a few graphic memoirs about immigration experiences, and study the visual techniques authors use to communicate the experiences common to immigration — including discovery of a new world, alienation, and trauma. I focus on the ways graphic memoirists employ abstraction (including simplification, deletion, substitution, and addition of non-realistic elements) to tell their stories.

With the declaration of a “Refugee Crisis,” eyes have shifted to the plight of refugees traveling from the Middle East to Western European countries. But beyond these physical movements, there is another class of digital journeys taking place. Refugees are forced to contend with a Migration Apparatus that equips itself with a myriad of technologies used for border control and security. Refugees have the opportunity to claim some of these technologies for their own uses during their travels. My research explores the theory behind the European Migration Apparatus, the history of border control technologies, and the emerging anthropological studies being conducted to identify and explore the digital journeys refugees participate in on the road to Germany.

Awareness and treatment of women’s reproductive health is integral to the overall well-being of women everywhere. The Latina population in the United States faces unique challenges in maintaining their reproductive health in part due to cultural differences and language barriers. One helpful resource for navigating these challenges is the book Nuestros cuerpos, nuestras vidas (2000), a translation and cultural adaptation of the women’s health encyclopedia Our Bodies, Ourselves (1980). The book in English was revolutionary for its time in changing how women viewed and utilized the medical system. It was translated into dozens of languages, and the Spanish version was the seminal product of a collaboration between 11 countries. The adaptation was created specifically for Latina women and includes the personal stories of Latinas living in both Latin America and the United States. In this research project, an in depth study of Nuestros cuerpos, nuestras vidas is complemented with a more current review of the medical literature on Latina reproductive health issues and personal interviews with Boston community health organizers and workers. These interviews offer powerful testimonies from within the community about Latinas’ reproductive health experiences and resources in Boston. My study reports on the current resources specifically oriented to pregnancy, HIV/STIs, health insurance, and the need for culturally-competent medical care for Latina women in the Boston area.

Terra Prohibitus: Race and Politics in Preserving a French Identity

With reelections approaching in 2019, French politicians have been focusing their platforms on the most pressing matters for voters, and the topic of immigration has only grown more prominent in political discourses. Contemporary management and political analysis of migration into France carry nuanced nationalist sentiments, and the concern of preserving the “French identity’’ is riddled with racially-focused rhetoric. As the concern for the preservation of a national identity grows more prominent, the role of France in both the cause and effect of immigration is misconstrued. For this presentation, the question to be asked (and answered) is how is race catalyzing nationalist sentiments and influencing migration policies in France.