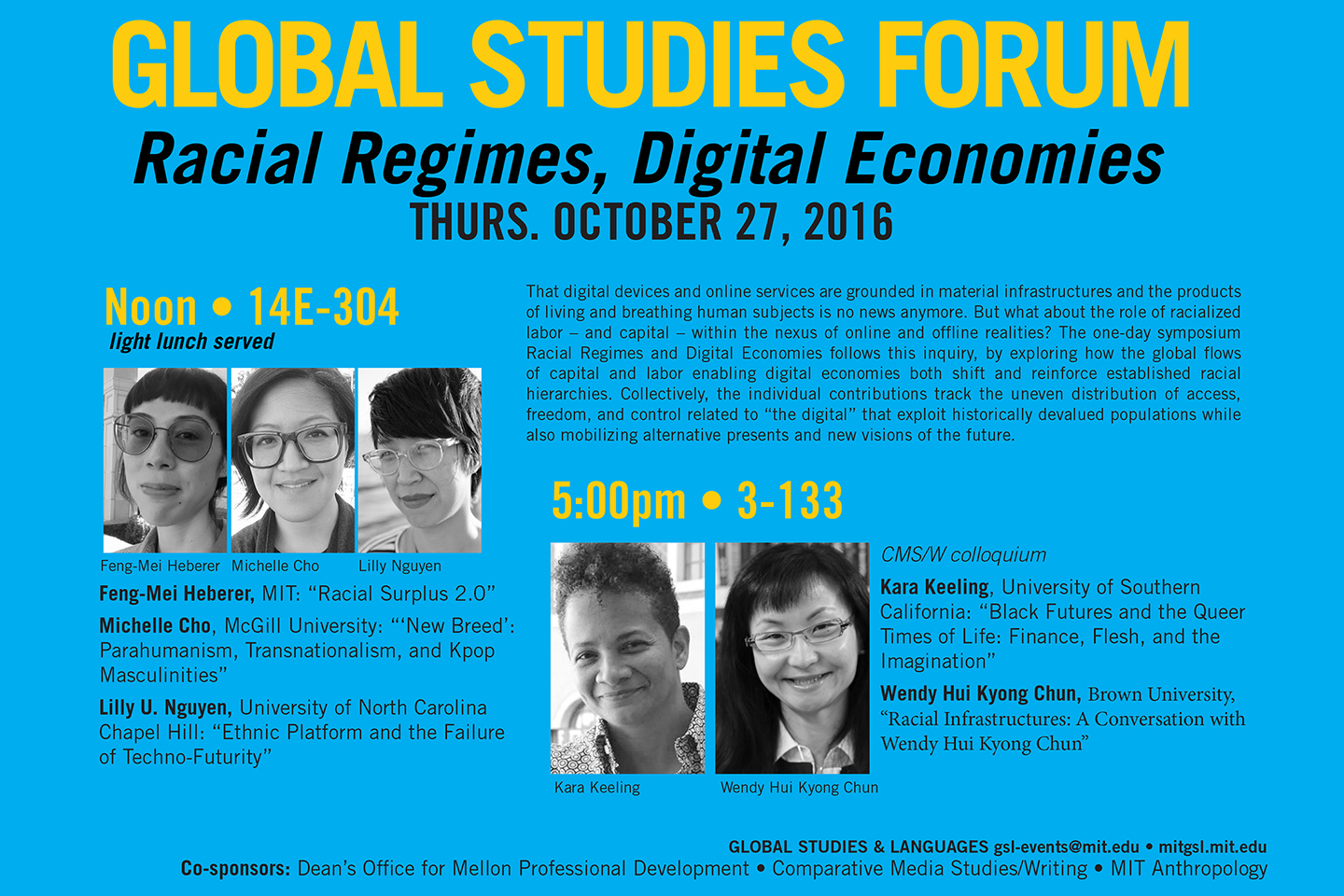 That digital devices and online services are grounded in material infrastructures and the products of living and breathing human subjects is no news anymore. But what about the role of racialized labor – and capital – within the nexus of online and offline realities?

The one-day symposium Racial Regimes and Digital Economies follows this inquiry, by exploring how the global flows of capital and labor enabling digital economies both shift and reinforce established racial hierarchies. Collectively, the individual contributions track the uneven distribution of access, freedom, and control related to “the digital” that exploit historically devalued populations while also mobilizing alternative presents and new visions of the future.

12pm-1pm – Feng-Mei Heberer (MIT): Racial Surplus 2.0
This talk focuses on the work of Asian German online celebrities, to explore the paradox of racial surplus – the logic by which racialized populations equal at once capital and expendability – in the age of social media. It does so by paying particular attention to histories of migration that pertain to Asian diasporans in the German context.

3pm-4pm – Lilly U. Nguyen (University of North Carolina, Chapel Hill): Ethnic Platform and the Failure of Techno-Futurity
This talk introduces the idea of the ethnic platform to elucidate the temporal politics of futurity within techno-capitalism. In spite of the ethnic platform’s short-lived existence, this failure nevertheless reveals to us the struggles over ethnic futures and the politics of deferral in the entrepreneurial economy.

5-6pm – Kara Keeling (University of Southern California): Black Futures and the Queer Times of Life: Finance, Flesh, and the Imagination
This talk explores the implications of the efficacy of corporate futures scenarios for other modes of speculation, including those speculative cultural forms such as Afrofuturism that might afford creative imaginings of alternative futures. Extending Kodwo Eshun’s insights into the salience of the rise of corporate scenarios for Afrofuturist cultural production, I consider what thinking certain Afrofuturist themes from within the long history of speculative capitalism might offer to present political investments in futurity.

Feng-Mei Heberer is a Mellon Postdoctoral Fellow in the Department of Global Studies & Languages at the Massachusetts Institute of Technology. Her research focuses on Asian and Asian migrant media cultures with emphases on issues of labor and affect. Her writing has appeared or is forthcoming in Sexualities and the edited volumes, Asian Video Cultures and The Autobiographical Turn in German Documentary and Experimental Film.

Lilly U. Nguyen is an assistant professor in the Department of Women’s and Gender Studies at the University of North Carolina, Chapel Hill. Her research draws from the fields of information studies, feminist science and technology studies, and Asian-American studies and explores the dynamics of ethnicity, expertise, and information technologies in transnational circulation. Her recent scholarship has been published in The Journal of Peer Production, New Media and Society, and The Journal of Cultural Economy. Her work has been recognized by the National Science Foundation, the U.S. Department of Education, and the Fulbright Institute of International Education. Nguyen received her PhD in Information Studies from UCLA.

Wendy Hui Kyong Chun is Professor of Modern Culture and Media at Brown University. She has studied both Systems Design Engineering and English Literature, which she combines and mutates in her current work on digital media. She is author of Control and Freedom: Power and Paranoia in the Age of Fiber Optics (MIT, 2006),  Programmed Visions: Software and Memory (MIT 2011), and Updating to Remain the Same: Habitual New Media (MIT 2016).